Ray-based seismic modeling methods can be applied at various stages of the exploration and production process. The standard ray method has several advantages, include computational efficiency and the possibility of simulating propagation of elementary waves. As a high-frequency approximation, the method also has some limitations, particularly with respect to a lack of amplitude reliability in the presence of rapid changes of the model functions representing elastic parameters and interfaces.

Given the objective of improving the applicability of the standard ray tracing method, we introduce Kirchhoff modelling to our software portfolio. It is based on the well-known Kirchhoff integral solution for calculating the seismic wavefield between a shot and receiver in the given Background Model, for a given target. The Kirchhoff integral provides a robust method for implementing seismic modelling and prestack depth migration. Thus, with this approach we are able to convert a velocity model given in depth domain to seismic data in time domain and to migrate the shot data to a depth image. Kirchhoff modelling keeps the flexibility of ray tracing (selection of a part of the wavefield, efficiency) while adding benefits known from FD modelling (diffractions). Kirchhoff modelling is slower than raytracing, but more efficient and flexible than FD modelling. 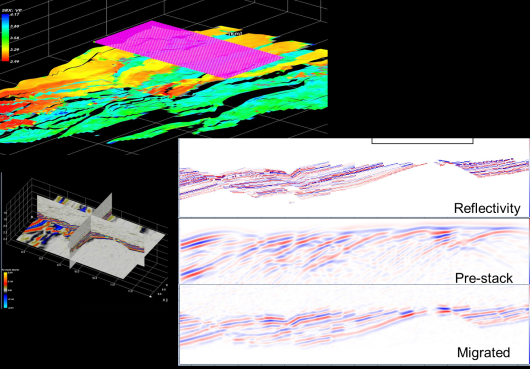 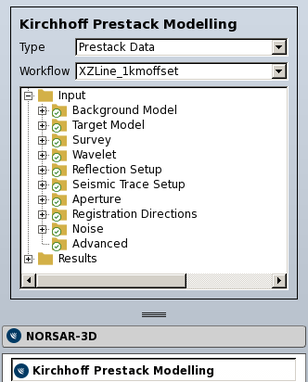 Forward modelling of seismic data is the use of geological models of the earth to simulate seismic field experiments. Models can be one, two, or three dimensional and consist of depth horizons and associated elastic properties, such as P wave velocities, S wave velocities, and densities. An application of forward modelling is for verification of structural and stratigraphic interpretations. For example, synthetic seismic sections derived from forward modelling can be compared to stacked sections to verify the original interpretation. If needed, the original interpretation or model is altered, and the process repeated until a desired correlation between the actual data and modelled results is observed.

Generate the data you need!

The new Kirchhoff modelling software allows to select which part of the wave field should be included, thus it is easier to identify specific events in you real data by correlating with the synthetic seismic traces. 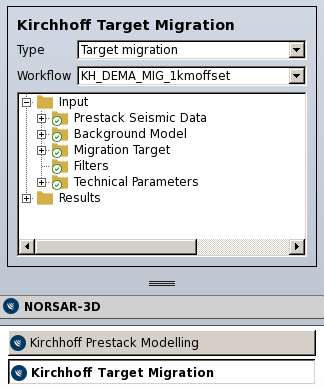 Seismic data processing is aimed to image the earth's subsurface, that is, obtaining a picture of subsurface structure from the seismic waves recorded at the earth's surface.

Of the many processes applied to seismic data, seismic migration is the one most directly associated with the notion of imaging. Until the migration step, seismic data are merely recorded traces of waves that have been reflected/diffracted from anomalies in the subsurface. In its simplest form, seismic migration is the process that converts information as a function of recording time to features in subsurface depth. It moves dipping events to their correct positions, collapses diffractions, increases spatial resolution and is probably the most important of all processing stages.

In order to provide the complete picture to the user, we have integrated a Kirchhoff target migration workflow into the existing modelling environment. Here, the generated synthetic data will be directly transferred into the corresponding picture of the sub-surface for a given input set up.

Find out how sensitive the migrated result is to velocity deviations.